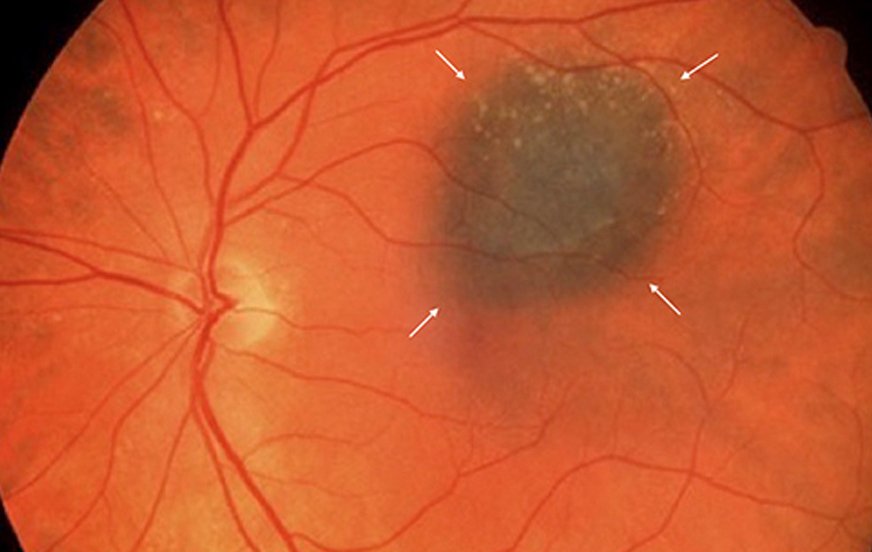 A choroidal nevus (plural nevi) is a flat, benign, colored spot that appears on the inside of the eye, similar to freckles or moles on the skin. A choroidal nevus refers specifically to a pigmented mark that forms in the choroid, a layer behind the retina. It is caused by the growth of cells called melanocytes, which produce the colors of your hair, skin, and eyes. In the eye, the melanocytes behind your retina normally spread out evenly. Sometimes these cells clump together and form a nevus.

Nevi usually never causes symptoms. However, rarely they can leak fluid or be linked to the growth of abnormal blood vessels. This could lead to retinal detachment, flashing lights, and vision loss.

Choroidal nevi are very common, especially in the Caucasian population and occur in about 5-10% of the population. They are very rare in African Americans. Nevi can be found most commonly during a routine dilated eye examination. Just like a skin freckle or mole, nevi should be watched regularly for changes. These changes will be monitored with your ophthalmologist with the help of tests such as B-scan ultrasonography, fundus photography, fluorescein angiography, and ocular coherence tomography to assess whether the nevus is growing or changing. Although it may be congenital, choroidal nevus is not typically seen in small children and typically first seen after puberty.

Nevi typically do not require treatment. They do carry some potential, like with skin moles, to evolve into melanoma. Statistically, only about one of every 500 choroidal nevi will undergo malignant transformation if followed for 10 years. Some nevi have features that make them more likely to grow into a melanoma.  These features include:

Growth is observed in about 4% of cases with none of these risk factors, 36% of cases with one risk factor, and over 50% of those with three or more risk factors. Melanoma can be treated with surgery and/or radiation right here at Retina Specialists of Michigan with our ocular oncologist Dr. Aaberg. If you have questions regarding your vision or symptoms, speak with one of our staff at (616) 954-2020.

Back To Services
Accessibility by WAH